THE CARRIER-LAUNCHED DOOLITTLE RAID ON JAPAN 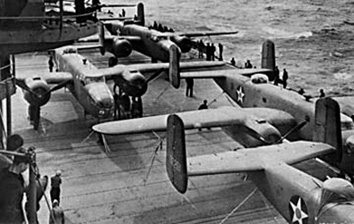 Specially modified B-25 Mitchell bombers crowd the flight deck of USS Hornet as
the Americans prepare to send a return gift for Pearl Harbor to General Tojo in Japan.

To reduce the risk to the American carriers, the bombers would have to be launched 500 miles (804 km) from Tokyo, and have the range to reach friendly forces in western China. Only land-based bombers of the American Army Air Corps could achieve such an operational range, and it was decided to use specially modified B-25 Mitchell medium bombers. Lieutenant Colonel James Doolittle was placed in command of this special bomber group, and after air crews had proved that they could take off in a distance equivalent to the flight deck of an aircraft carrier, sixteen B-25s were loaded aboard the aircraft carrier USS Hornet berthed at San Francisco.

On 2 April 1942, Hornet left San Francisco and set course for Japan with her flight deck crowded with B-25 bombers and her own aircraft stowed below on the hangar deck. North of the Midway Islands in the central Pacific, Hornet was joined by the carrier Enterprise which would provide fighter cover for the task force during the long voyage to Japan's home waters and supplement Hornet's own fighters on the return journey to Hawaii.

Early on the morning of 18 April 1942, when the American carrier force was still 700 miles (1,126 km) east of Tokyo, radar on the Enterprise detected one of the picket patrol boats manning Japan's eastern defensive perimeter. Although the Japanese picket boat was sunk by the cruiser USS Nashville, the commander of the carrier force, Vice Admiral William F. Halsey, could not ignore the possibility that a radio warning had been sent by the picket boat to Tokyo. Rather than increase the risk to America's vital carriers, Halsey decided to launch the B-25 bombers 150 miles (240 km) short of the planned launching point. This decision greatly reduced the prospect of the B-25s reaching friendly forces in western China, but Lieutenant Colonel Doolittle agreed with Halsey's decision.

Conditions were not good for launching heavily laden bombers from the deck of a carrier. Gale force winds lashed Hornet and churned up heavy seas which drenched deck crews as they readied the bombers for take-off. When all sixteen B-25s were airborne at 9.25 a.m. and heading for Japan, the American carriers and their escort warships turned and steamed back to Hawaii at top speed.

Thirteen of the B-25 bombers flew over Tokyo and dropped their bombs on oil storage facilities, factories, electricity generating plants, and military targets. The other three B-25s dropped their bombs over Yokohama, Nagoya and Kobe. All but one of the B-25s ran out of fuel before reaching friendly forces in western China and were forced to land in Japanese-occupied China. With the assistance of friendly Chinese farmers, seventy-one of the eighty airmen involved in the Doolittle raid reached free China. The vengeful Japanese rounded up and executed many of the Chinese civilians who had assisted the American airmen. Eight airmen were captured by the Japanese who executed four of them in retaliation for the raid. This grave war crime foreshadowed a frequent Japanese practice of executing captured Allied airmen throughout the Pacific War. The other four captives survived harsh imprisonment and were released at the end of the war. Lieutenant Colonel Doolittle survived the raid and rose to high rank in the Army Air Force.

Although physical damage to the Japanese cities was slight, the daring "hit and run" counter-attack stunned Japan. Japan's military leadership was humiliated by the Doolittle raid because it had proved to be incapable of honouring its pledge to protect the safety of the emperor.

Although its tactical significance was slight, the Doolittle raid had a profound influence on the outcome of the Pacific War. It threw Japan's strategic planning and priorities completely off balance. Prior to the raid, Japan's highest strategic priority in the Pacific had been to isolate Australia from her powerful ally, the United States, by seizing and fortifying a chain of islands between Hawaii and Australia. After the Doolittle raid, defence of Japan's home islands from attack by the United States Navy would also be given the highest priority by Japan's military leadership.

The raid persuaded Japan's Imperial General Headquarters that Admiral Yamamoto's concern for the safety of Japan's home islands was well founded, and that it was necessary to extend Japan's eastern defensive perimeter closer to Hawaii by seizing and occupying America's Midway islands in the central Pacific. Admiral Yamamoto had developed a complex plan for a Midway offensive to take place in June 1942. Yamamoto's plan was designed to extend Japan's eastern defensive perimeter to the Midway islands and draw the aircraft carriers of the United States Pacific Fleet to a decisive battle in the central Pacific. Yamamoto intended the capture of Midway and destruction of the US Pacific Fleet to be the foundation for a major Japanese offensive against Hawaii in October 1942. The admirals of Japan's Navy General Staff had initially opposed Yamamoto's Midway Operation as posing a logistical nightmare but gave their support after the Doolittle Raid demonstrated Japan's vulnerability to attack by American carriers based in Hawaii. However, the Navy General Staff insisted that the Midway Operation include Japanese occupation of America's Aleutian Islands off Alaska to provide a northern anchor for Japan's extended eastern Pacific perimeter. This plan was approved by Imperial General Headquarters which was confident that Japan's powerful navy could destroy the American carriers.

Japan had now committed itself to complex simultaneous military operations in the northern, central and southern Pacific in May and June 1942. Carried away by the euphoria produced by easy initial victories resulting from surprise attacks on British and American Pacific outposts, the Japanese military leadership had now made the fatal error of assuming that the United States Navy would adopt a largely defensive posture when confronted with further Japanese military aggression. This arrogant belief in Japan's invincibility, and underrating of American military capabilities and response, would be reflected in subsequent Japanese military planning, and ultimately lead to Japan's defeat.

Needless to say, after a series of military disasters following Pearl Harbor, the Doolittle air raid on Japan provided a major boost to morale in the United States.